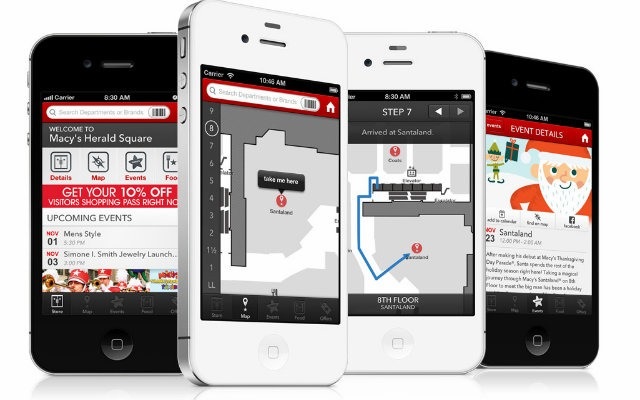 US retailer, Macy's has added a new feature to its iPhone app that provides indoor turn-by-turn directions for its massive flagship location in New York City's Herald Square, courtesy of Meridian, the software startup behind an indoor GPS platform. "Macy's is kind of the leader right now in a lot of digital initiatives. They've been trying out lots of digital initiatives to engage with shoppers in their homes and in stores," said Jeff Hardison, VP of Marketing and Business for Meridian, explaining why the startup chose to partner with Macy's. The goal, he says, is that Macy's will gradually expand the mapping feature to all or most of its other retail locations in the future. Since launching in 2011, Meridian have worked with the Museum of Natural History in New York and the Venetian hotel and casino in Las Vegas. The service uses a unique combination of GPS and WiFi data to pinpoint the precise location of the smartphone user indoors. Meridian also goes one step further and can advertise and direct users to specific items at a given location — a potentially powerful tool for retailers like Macy's.  "Not only will we be able to give shoppers a utility to get around stores and find products, but now we will be able to ask if they want to receive offers based on where they are standing," Hardison told Mashable. "You can imagine how big that is [for retailers]." Meridian announced last year that it is making two of its indoor positioning software development kits available to third-party developers, who can use it to build an indoor GPS experience into new or existing apps. Macy's was one of three businesses to be part of Meridian's beta test for this effort and the department store chain is the first major retailer to roll out the indoor GPS feature.