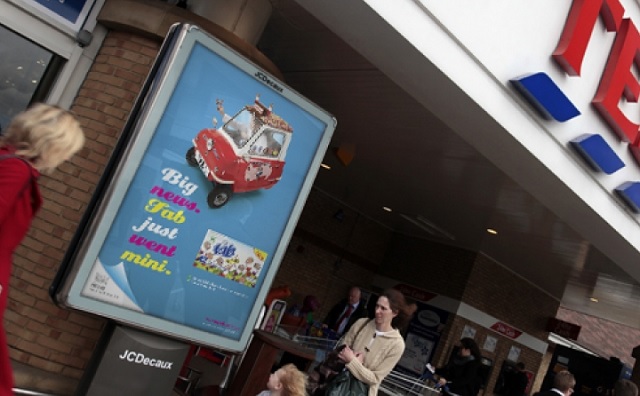 Tesco have recently installed 400 72" screens outside 400 of it's 3,140 stores. These screens fuse data on the movement of people at different points of the day using data from a new UK based company called Route, plus data mined from Tesco's loyalty card such as when and where products are sold and at what time of day. Route's (formally Postar) system is a passive sensor which picks up all travel pathways and has been collecting journey data on 28,000 people. It knows where people have moved and what they have been looking at. It then produces audience estimates based on data captures how many people saw an advertisement, how often they saw it and the profile of those who have seen it. It has been designed around people’s daily movements on a hyper-local level, making it possible now to plan by bespoke geographical areas and by day part. An average day a person will make eye contact with around 27 roadside posters and 14 bus ads, with a further 74 encountered for every Tube journey. In a week, each person travels an average of 241km out of home, with increasing speed until their sixties. The study also shows that men travel almost a third further than women, at 288km versus 197km per week. More than 360,000 road, bus and Tube frames are currently included, with environments including airports, rail and shopping malls to be added at a later date. Route's 'hyper-local' geography will help advertisers plan by town or bespoke geographical area. "Increasingly, time spent out-of-home is about understanding the routes that people take," says James Whitmore, managing director of Route. "It is about knowing the pathways of the eye. By defining the audience it will be possible to use the data to plan, trade or value the medium."