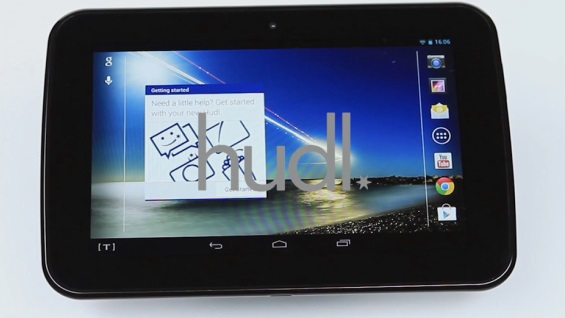 Tesco is launching its own tablet computer, the Hudl, as part of its multichannel strategy to enable shoppers to buy whenever, however and wherever they want. The supermarket says its move to launch the £119, 7 inch high definition tablet at the end of September brings the technology within the most people’s reach, enabling them to access e-commerce services as well as online entertainment. Tesco Clubcard holders will be able to use Clubcard Boost to double the value of their vouchers to buy the tablet, set to launch on September 30th. The tablet prioritises Tesco’s own digital services, including blinkbox movies and TV, music and Clubcard TV, all accessible from a dedicated launcher button. Users can also access a wide variety of online entertainment and shopping through Google Play, which hosts more than a million apps. The system is built on the Android Jellybean 4.2.2 operating system. Tesco says it is launching the Hudl tablet, which it has designed and built itself, in the light of Ofcom’s statistic that three-quarters of UK households do not have a tablet. Tesco says its own research shows many feel the technology is too expensive or intimidating. “Hudl is a colourful, accessible tablet for the whole family to enjoy,” said Tesco chief executive Philip Clarke. “The first stage in our tablet offering, it’s convenient, integrated and easy to use with no compromise on specification. Customers are quite rightly very discerning about the technology they buy so we knew we had to be competitive on all fronts. “Being online is an increasingly essential part of family life and whilst tablets are on the rise, usage is stil quite limited. We feel the time is right for Tesco to help widen tablet ownership and bring the fun, convenience and excitement of tablets to even more customers across the UK. The digital revolution should be for the many, not for the few.” Tesco has pioneered many aspects of online shopping, introducing grocery home delivery to the UK, as well as supermarket drive through collection. It also operates what it says was the world’s first virtual store in South Korea, where commuters buy groceries via their mobile phones.