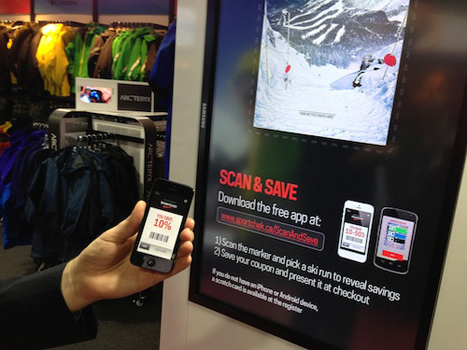 Canadian sports retailer, Sport Chek have launched a new concept store with a digital focus.  It has outfitted the 12,000-sq.-ft location at Yonge and Eglinton in Canada with the latest digital technology to enable more interaction between customers and the brand. Sport Chek partnered with Samsung and installed 140 digital screens throughout the store.  These include smaller format screens such as digital tiles built into display tables, tablets that have been incorporated into the top of clothing racks and loads of digital displays to showcase videos and still images. The storefront features a large digital projection screen that displays high-definition video, still images and may eventually show live feeds of sporting events.  Next to the store’s escalator is a wall of 19 screens. When consumers approach, an Xbox Kinect activates and displays promotions or a simulated chairlift on the screens. A Community Board located on the second floor provides customers with schedules, updates and statistics for local sports teams. Consumers can log onto the Sport Check Facebook page to submit photos for the board. Each sales associate has also been equipped with a tablet that allows them to takeover larger screens in the store to showcase vendor information and advertising – some of which appears as part of the regular in-store, on-screen content. Ads aren’t the only marketing opportunity for brands sold in the store. Reebok, for instance, installed a build-your-own sneaker kiosk. The finished product will be shipped to the consumer approximately four-to-six weeks later. The store features the popular Adidas shoewall - Adiverse which was one of the most revolutionary interactive touch-screen in store experiences when it was launched a few years ago into Adidas retail stores. Duncan Fulton, the chief marketing officer at FGL Sports, told Marketing, “I think this is the first store where you can say it holds up to the brand really well from every aspect, from the staff to the design… and of course all the digital.” Sport Check will support the new retail concept store, which was designed by Sid Lee and officially opened Jan.26, with local print advertising and a street celebration once the weather improves, said Fulton.