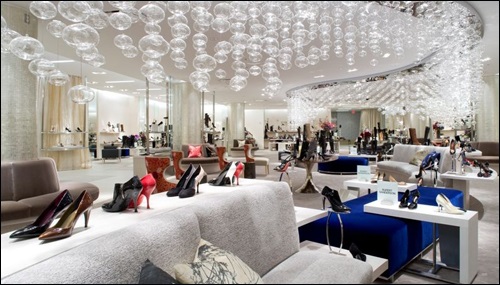 With 4,000 individual shoes on display at any given time, Saks Fifth Avenue's flagship store in New York City has the task of ensuring that the correct shoe styles are in the proper locations, and that none are missing. With the use of RFID system, the store has raised its display compliance rates from 65 percent to nearly 100 percent. That means that if a style of shoes is available in the backroom, a sample is on display for customers. Based on the results of a 2012 pilot of the technology, conducted at its New York City store, Saks Inc. has this year installed the system at three of its 40 other Saks Fifth Avenue locations—one in Bal Harbour, Fla., and two others in Beverly Hills and Costa Mesa, Calif. The solution employs Avery Dennison AD-380 EPC Gen 2 ultrahigh-frequency (UHF) RFID tags and Motorola Solutions MC3190-Z handheld readers. The collected read data is managed by Tyco's TrueVUE Store Performance software platform that includes a new application to alert store associates regarding any samples missing from the display shelves. The New York City store's shoe department encompasses 15,000 square feet—the entire eighth floor—and displays approximately 3,000 different models of women's shoes, as well as 1,000 models of men's and children's footwear. It receives at least 5,000 new pairs of shoes weekly, which are stored in the stock room. Prior to the RFID system's installation, to ensure that all shoe styles and sizes were available in the stock room, and that all styles were displayed on the sales floor, employees had to conduct manual inventory checks, which were exhaustive tasks that were too time-consuming to ensure accuracy throughout the entire shoe department. By the time an individual was finished with the four-day process of checking the full sample inventory, the numbers attained may have already ceased to be accurate. "Saks was challenged with ensuring that all shoes in our inventory were represented by a sample on the selling floor," says Ed Stagman, Saks' senior VP of store operations. Having each shoe style represented on the floor is critical, he explains. "We instituted a process where support associates would scan the [bar-coded] ticket on the sample, and a report would be generated that compared what was scanned on the selling floor to what was reported as present in the inventory." The report then indicated any products that might missing on the selling floor. "Initially, we were experiencing too many styles that were not represented on the selling floor." Because the department size is so large, Stagman says, this process took many hours to complete, and staff members thus broke the task into portions—a quarter of the shoe floor was scanned during a four-hour morning shift. "We needed to find a more efficient and productive means of accomplishing this task," he states. Tyco Retail Solutions developed a system by which an RFID label is applied to each sample shoe's sole, according to Jamie Kress, Tyco's director of sales and strategic accounts. Prior to placing a new sample on display, Saks' employees first use the TrueVUE Mobile software to link an RFID tag's encoded ID number to the display shoe's Universal Product Code (UPC). The retailer then places its own standard product label over the RFID tag on the shoe's sole. In the future, this process will be simplified; the Zebra Technologies RP4T mobile Wi-Fi RFID label printer-encoder will print and encode a unique identifier on a single RFID display label, with that ID number linked to product data in the TrueVUE software. This is accomplished via a Web services integration between Saks' inventory software and the TrueVUE EPC Commissioning application. While conducting an inventory check, workers carry the handheld reader and wave it near the shelves, thereby performing a full count of all styles and colors available on the sales floor. Upon completing this task, they can pull reports from the TrueVUE software in order to compare the items counted on display against inventory data from Saks' inventory software, which then helps them locate any samples that may be missing. With the RFID system in place, Stagman says, the New York City store is able to gather on-floor sample information for the entire floor within about 15 to 20 minutes. "This means we can perform a 100 percent audit every day, prior to store opening, and ensure 100 percent representation," he states. "This results in a labor savings and a marked improvement in [compliance]." Stagman claims that the shoe-department staff at each of the four RFID-enabled stores "is thrilled with the efficiency, and the fact that they know, every day, that all samples are on the floor." The company intends to continue expanding the technology to other stores, he adds, following the fall peak-selling season. Regarding the use of RFID, Stagman says, Saks is currently "developing plans to expand to footwear departments in other stores, and developing a pilot application for handbags and denim."