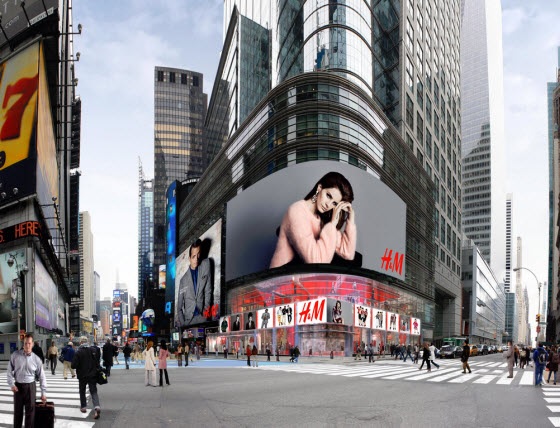 H&M's new 4 storey store in New York's Time Square has been equipped technology that allows consumers to pay for purchases in the dressing-room area. iPad stations and benches can also be found in the fitting rooms on various floors. There will also be “interactive mannequins” with screens attached to their foreheads that play videos or flash photos and special deal alerts. Meanwhile, shoppers will be invited to walk a “virtual runway” and have their catwalk performances projected on the store’s external LED screens for the throngs of tourists and office workers passing through Times Square. H&M spokeswoman Jennifer Ward describes as a “futuristic, tech-savvy store design.” She added “The mezzanine will consist of a Social Media Lounge, which will include seating, free Wi-Fi, integrated iPads, headphones with music, mobile fitting rooms, and a photo studio.” H&M are reported to have had some teething problems with the new technology but then this is meant to be a trial.