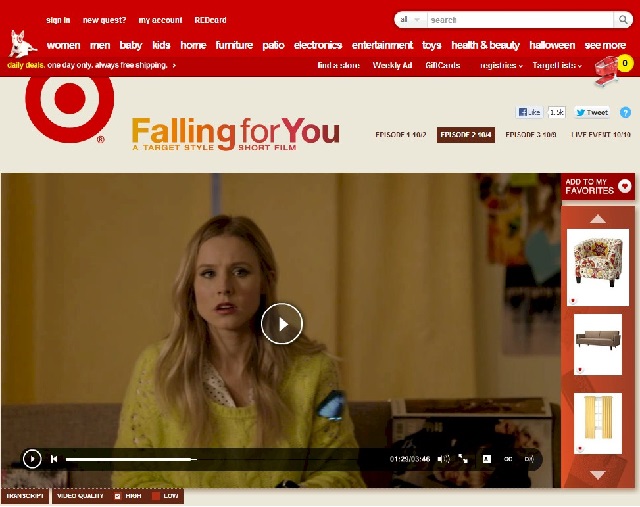 Last Autumn, US retailer Target made a 12-minute romantic comedy in which almost everything on-screen is for sale at Target and available for immediate purchase. Using interactive video technology, luxury brands like Gucci and Neiman Marcus helped pioneer "shoppable videos" amid surging online viewership. These efforts typically resemble TV commercials with products you can click on and buy. Target has taken the marketing tactic a leap further by creating an episodic mini-series to draw shoppers into a story. "This is the blending of the Home Shopping Network and entertainment," said Leon Nicholas, All Postsan analyst for Kantar Retail in Boston. Target's innovative marketing, a key to its success, may be more important than ever as investors discount its stock by 42 per cent on a price-to-sales basis with the Standard & Poor's 500 Retailing Index. Heralded on the website as a "Target Style Short Film", the video is part of the discounter's seasonal marketing campaign. The main goal is to create buzz for its "Fall For" slogan and its private-label products. More than 100 of these are advertised in the short film, which was directed by Mad Men director Phil Abraham and written by Semi Chellas, a Mad Men co-writer. In an early scene, viewers see her running through a park. As she comes into focus, icons of the pants, shoes and shirt she is wearing scroll down the screen just to the right of the video window. While the episode continues to play, viewers can click on the C9 by Champion products, an exclusive Target brand, and check them out after the episode. They can share them on social media sites such as Pinterest and Facebook as well, or buy them immediately. And, even if they don't that's fine by Target, according to marketing executive Shawn Gensch. "The way we gauge success here is the differentiation of the Target brand," he said. "This is one component of a very robust messaging calendar and at a very key season for retail." Target declined to say how much it spent on the project. Shoppable entertainment may be a hint of what's to come as the mashup of the Web and TV accelerates, said Max Lenderman, director of experiential marketing at the advertising agency Crispin Porter & Bogusky. He said that for years, advertisers have been dreaming of a way to make it easy for people to buy products they see on-screen, and this could be a first step. "It's kind of like what 'smart TV' has been promising everyone forever," Lenderman said. A scenario in which "someone likes something on a show, and on your remote-control you can click and buy it. This is a panacea for marketers." Analyst Leon Nicholas said the retailer's cheap-chic ethos — exemplified by its slogan of "Expect More. Pay Less" — has helped it close on $70 billion-plus in annual sales. A large part of that growth has been driven by its quirky and risky marketing.