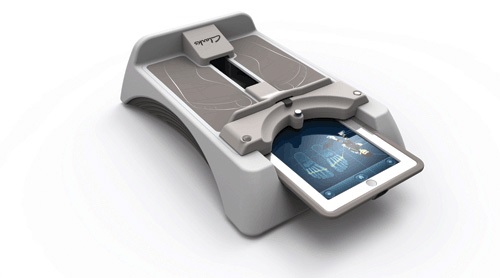 UK based shoe retailer, Clarks, has rolled out iPads to its stores to help measure children’s feet. The iPad foot gauge has been trialled in 50 stores and will be rolled out across the rest of the 468 UK stores by the end of Spring. It replaces the old fitting machines with an app. The tool features the brand's animated characters, Jack and Daisy, who help keep kids entertained. Clarks said the new system saves floor space, and means the foot gauge can be taken to the customer wherever they are in the store. The iPad is also be used as a mobile Point of Sale device. Clarks Chief Executive Melissa Potter said: “We have been testing this new technology in a small number of stores, with the aim of completely revolutionising our foot measuring service.” Chris Towns, Innovations Manager at Clarks International added: “We’re constantly seeking to innovate and improve both product and customer experience at Clarks. Combine this with our shoe making experience and heritage and it makes for a very powerful combination.” Retail-Innovation.com interviewed Claire who had her two children measured on the device. Claire commented, "The children were invited to interact with the iPad by putting in their age and choosing their sex (by choosing a character). Then they stood on the base-station (on the feet marks) and the iPad is inserted into the top of the station. The assistant had a separate (manual) device for taking a measurement of width and she typed in the value into the iPad. And the size and width popped up. So the base station was measuring length in some way." "It was very accurate for one son. For another, he ended up choosing a narrower width than it suggested. Fantastic way of capturing data as part of the buying process in terms of actual size, sex and age. She didn’t ask for e mail and she didn’t appear to record on it what we actually bought (but she might have after we left)."